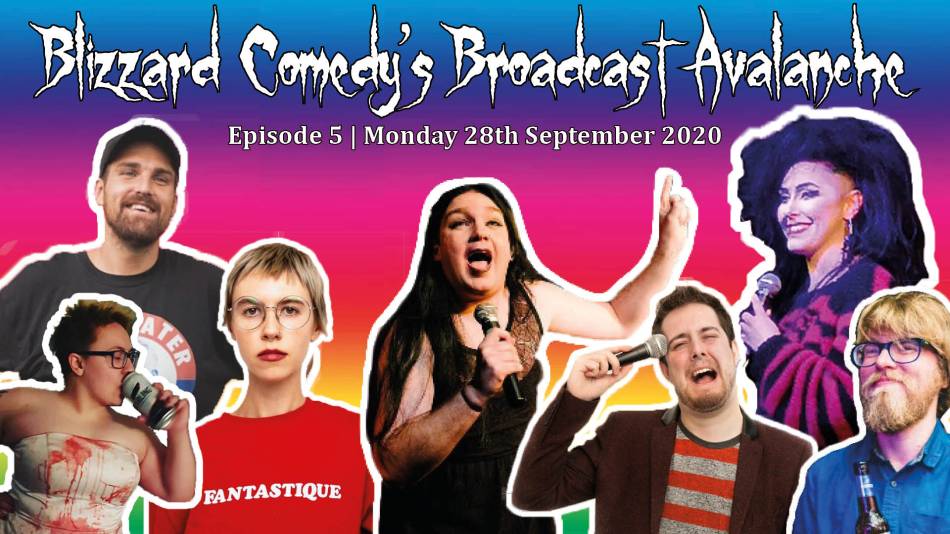 As long as live entertainment is still restricted and we can’t take our best game to the stage, we’ll be continuing with Blizzard Comedy’s Broadcast Avalanche. If you’ve missed the episodes we’ve streamed so far, you can find them all on our YouTube channel here: https://www.youtube.com/channel/UCz8rtSwsjVr-L8FgLCJ0VOQ

Subscribe to make sure you don’t miss out on any of the other cool stuff we’re working on right now!

Our next show will be streamed live on Monday 28th September.

Our guests for this episodes are:

ERYN TETT
Eryn Tett (Cherry Comedy Break Out Act of the Year 2020 Winner) is an alternative comedian based in Manchester. Described as “fast moving…and absurd” (Diva Magazine), her stand up is made up of word play, short jokes, odd observations and surreal storytelling set to a charmingly uncomfortable rhythm

POPE LONERGAN
Pope Lonergan is a comedian, Quaker, drug addict and creator of ‘Pope’s Addiction Clinic’ (“From fearless and funny to heart-stoppingly raw

KATIE MITCHELL
A rising star of the Midlands comedy circuit, Katie Mitchell’s comedy is alternative yet pervasive. She revels in a mainstream stand-up environment, as well as more specific events like cabaret, burlesque, and music festivals.

JAKE DONALDSON
Mixing storytelling with honest and confessional stand-up, Jake is one of the most exciting up-and-coming comics to come out of the alt/indie comedy scene. He’s fresh from a UK tour of his recent solo show Help! I’m Trapped In The Body Of An Adequate Comedian!, which was described by Edfringe.com as ‘not to be missed. Incredibly funny and down-to-earth’ Named one of Huffington Post’s 10 Must See New Acts at the Edinburgh Fringe

As always, our show will be free to watch with a pay-what-you-feel option for contributions which will be split between our acts and team.

If you would like to make a donation, you can PayPal us here: paypal.me/blizzardcomedy

Or you can make regular donations by backing us on Patreon: https://www.patreon.com/blizzardcomedy