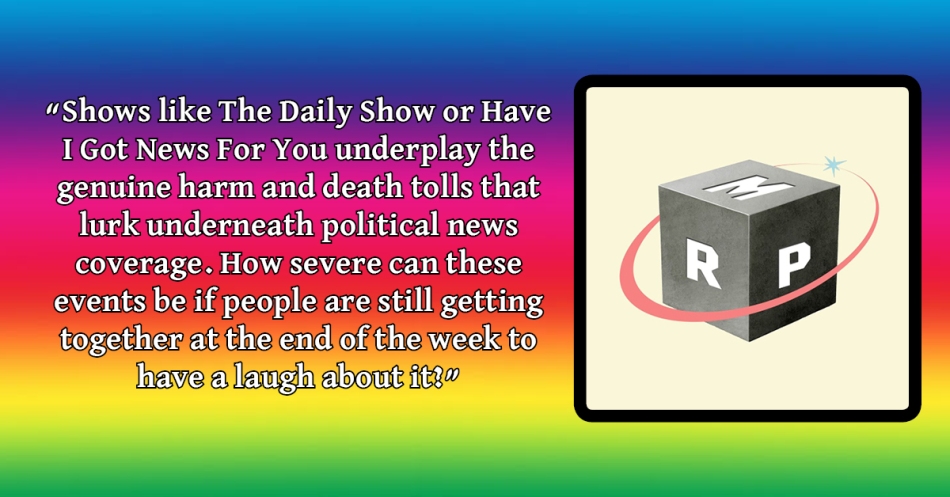 Tell us about your podcast, Mandatory Redistribution Party.

Mandatory Redistribution Party is a podcast for radical left interviews, lore and repartee run by myself and Jack Evans. We’re two comedians, and friends(!), united in being far to the left of anything represented in parliamentary politics.

Political Education on this shivering island is mud-tier, otherwise it wouldn’t fall to two comedians to explain the basics of socialism. Expect discussions, interviews, hypothetical collaborative fiction and noise-art essays on the history of left thinkers.

What inspired you to launch your podcast?

There’s a received wisdom that live comedy is this staunchly left wing medium. I think that’s a myth propagated by Telegraph communists bemoaning the lack of overt racism at the Edinburgh Fringe. Liberalism won the culture war, Neoliberalism won the actual war, and Socialism is… uh… well, just gasping for breath really.

Doing comedy about actual left politics is difficult because often you need to do a lot of explaining just to get to a punchline. Live comedy requires you to try and appeal to everyone to make the show work and that can be difficult if you’ve made an explicitly anti-capitalist statement and you’ve got actual Tories in the audience.

Podcasting by contrast allows us the time and space to go into subjects we find really interesting and then allow people to come to us to see what we’ve made. This means we don’t need to fret about the guy in the tweed in the third row who keeps harrumphing when we start talking about wealth redistribution.

How do you decide which political and philosophical ideas to explore on your podcast?

It can be tricky! As a rule we don’t want to follow the news cycle or the events of Westminster as those institutions have always been the enemy of radical transformative politics.

We try to pick some universal concept that has some bearing on the current situation, but will still be relevant in months and years to come. When the pandemic hit, our next episode was about landlords because rent became a pressing issue for the newly unemployed, but the exploitative nature of landlords will remain relevant right up until the revolution (which I predict will happen the moment we can stand physically close enough to each other to organise one).

Often we take our cues from what we’ve been reading or thinking about lately, and then just try to release them at times when they’re tangentially relevant to Events.

What is your trick to making big ideas digestible in the short space of time you have for each episode?

We’ve only got two tricks up our sleeves and we use them a lot. We love hypothetical scenarios – think: the Socratic Method meets Dungeons and Dragons. We also like to take a big idea and turn them into a tight explanatory essay set to music.

But the real trick is to remember that none of these ideas are actually that complicated.

The feeling that political ideas must be really hard and challenging to comprehend is just another way in which people are encouraged to be apolitical and inert. Marx’s Capital is dry as hell but the ideas contained within it were written to be accessible to the working class. All we’re doing is adding a few jokes and a few cool synth lines underneath.

How do you balance the serious topics you talk about with your light-hearted comedic tone?

We both have ADHD and find it hard to stay on topic. That is pretty much 90% of your answer. Everything else is judicious editing and generous use of the delete function.

How do you think discussing serious subjects in a comedy setting can influence the way people understand and think about them?

There were quite a few years before the podcast that I used to think that political satire was a social ill. Shows like The Daily Show or Have I Got News For You underplay the genuine harm and death tolls that lurk underneath political news coverage. How severe can these events be if people are still getting together at the end of the week to have a laugh about it? I hope our podcast can circumvent this because we don’t really shy away by talking about how terrible and horrific things are.

I’m making the podcast sound really morbid now, but I guess being on the left is ultimately morbid – seeing the world as a succession of death tolls. But that doesn’t mean that once you have that analytical lens you’re not allowed to muck around anymore.

For me, the real benefit of comedy is that it’s accessible. People will engage with comedy who would never engage with political thought through any other method. So the biggest influence it can have is that there are people thinking about things they never would have otherwise engaged with.

What do you hope people take away from your podcast?

We’ve had a lot of reports of people being actually radicalised by the podcast, including someone dropping out of the army and multiple people leaving the Lib Dems.

We weren’t expecting that but that’s the ideal – drop everything and accept our beliefs as your own. Isn’t that the best you could hope for?

But our intentions were (and still are) much more modest: principally I want people to listen and enjoy it, we are first and foremost comedians making entertainment. Secondly I hope people understand what we’re trying to communicate, think about it and can have that information available in their heads in future for whenever it might be relevant.

What are your favourite podcasts to listen to?

In terms of political podcasts I really enjoy Citations Needed, that’s an American podcast focussing on the interplay between media and power. Jacobin Magazine’s People’s History podcast is exceptional. For straightforward political analysis and theory stuff I recommend Politics Theory Other which is the podcast associated with Tribune Magazine. Also want to give a shoutout to Reel Politik Podcast if you’re in the mood for a St Petersberg Trollfarm centring on a single milk obsessed ex-MP.

As for comedy podcasts I really like Whatever Happened To Pizza At McDonalds and I’m currently listening to Brett Davis’ The Podcast For Laundry.

Oh, and I’m excited for Tiredness Kills the upcoming podcast from The Delightful Sausage which Jack is producing.

Do you have any advice for anyone looking to start their own podcast?

Learn how to edit audio before you start. Don’t do what we did where the podcast suddenly picks up in audio quality in episode 8.

You can listen to Mandatory Redistribution Party on Podbean here.