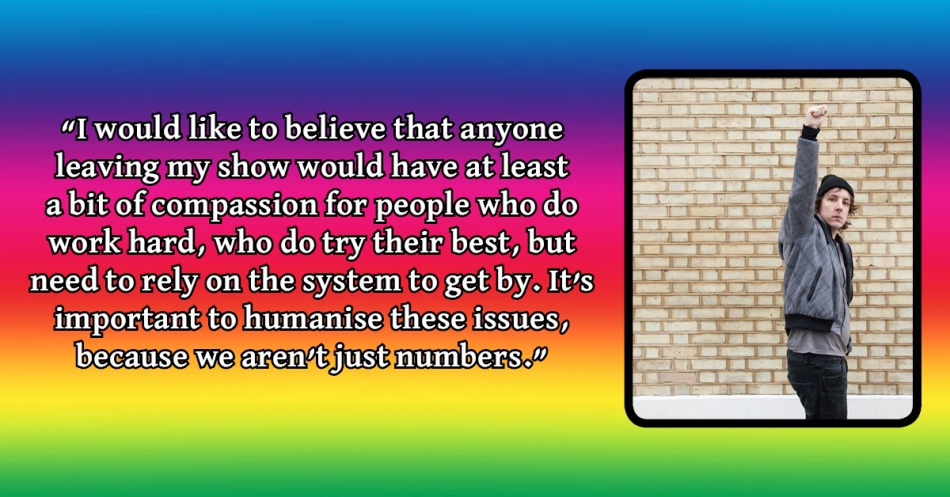 Tell us about your show, I, Tom Mayhew.

The show was inspired by my experiences after I left school in 2010; I had good qualifications, but I didn’t feel like University was for me. I wanted to get a job and save some money, but due to the 2008 recession – which led to record youth unemployment around the time – I found myself unemployed for over 3 years.

In the show I talk about my experiences of being on benefits, the DWP, and being a working-class person coming of age in austerity Britain. It’s mainly me rallying against negative stereotypes, and taking the piss out of the JobCentre.

What inspired the parallel between your show and I, Daniel Blake?

When that film first came out, it made me so happy that I had a little cry – this wasn’t even from seeing the film. It was from the pure fact that something existed that accurately portrayed my experiences of the benefits system – people working hard, trying their best, but being treated like shit. It was the first time I had seen something that didn’t just paint people on benefits as lazy and unintelligent, and actually saw us as humans.

I wanted to write a comedy show about my real experiences, that did the same thing as I, Daniel Blake: it stood up for other people who have been unfairly punished by a system which should be helping them, and my show does the same thing. With a load of punchlines thrown in!

You address serious social issues in your show, often through very personal stories. Was it ever difficult making these things funny?

Definitely. There are some things that I talk about in the show that I had never spoken about to anyone, so it was difficult just saying them out loud the first few times!

But I definitely feel that the best comedy comes from a place of raw honesty and reality, so it was worth pushing myself to make it funny. It is personally cathartic for me to do so, and if it can help others who have been through the same shit, then that’s the best thing I can do with any platform I am given.

How do you think exploring these topics through comedy can stimulate the conversation about them?

I am hopeful that just by being a guy on stage in a hoodie and trackies, showing that I am hard-working and intelligent, might make people think twice before they describe those on benefits in a prerogative term. There are some people whose opinion on benefits hasn’t moved on from what The Sun told them in 2003, but the reality is that such a large number of people use benefits for so many different reasons; ill-health, disability, being a single-parent, being a carer.

I would like to believe that anyone leaving my show would have at least a bit of compassion for people who do work hard, who do try their best, but need to rely on the system to get by. It’s important to humanise these issues, because we aren’t just numbers.

How do you feel comedy as an industry can provide a better platform for working class performers?

To be honest, I think awareness is a huge thing. A lot of comedians from working class backgrounds have had times when they have felt “this industry isn’t for people like me”. Times when people have said “you need to gamble £3k doing this, and if you don’t then you clearly don’t want it enough”. A lot of doors can be closed if you don’t have the money to get to a try-out spot, or go to an audition, nevermind massive things like the Edinburgh Festival.

Things are getting better, slowly – there are initiatives like Best In Class, Circuit Breakers, and there are some really good people in the industry who are pushing to have better representation of working class people in comedy.

But it would be nice to see some sort of initiative to help working class comedians take shows to Edinburgh. Just so we have the industry saying “we recognise it’s tough for you, and we want you here”.

You performed this show at the 2019 Edinburgh Fringe. How did your run go?

Really well, thank you! The audiences were so lovely, and I had the type of audience comments I have waited my whole life for. I was very proud of the show, lots of people enjoyed it… I couldn’t really ask for more than that. Being happy with what you are doing and it making other people happy is what we all aim for. The show also got some fantastic reviews, which I do think has made a few more people take notice of me and take me a bit more seriously, which is a good feeling.

Here are a couple of the best responses I got in Edinburgh:

A proper working-class man in his 50s – the type of guy who reminds me of my Dad – came up to me, shook my hand, and said “thank you. You are standing up for people like us”.

A young lady who said “thank you for making that. My parents were fucked around by the DWP as well, and they would have loved that”.

That is what I do it for.

I should clarify that the show is also very funny for people who are middle-class, and people with no experience of the benefits system – it would have tanked at the Edinburgh Fringe if it wasn’t!

Go and watch a few open mic gigs. You can easily chat to comedians, get a feel of the vibe, and see the sort of thing people are doing. They are usually free, the comedians will appreciate the audience, and will be more than happy to have a chat face-to-face; a large chunk of comedians do their first gig at an open mic that they have previously been in the audience, so it’s a perfect way to start networking and meeting people in the industry. That’s my best bit of advice.

Tom is performing I, Tom Mayhew at the Soho Theatre from 16th to 18th January.