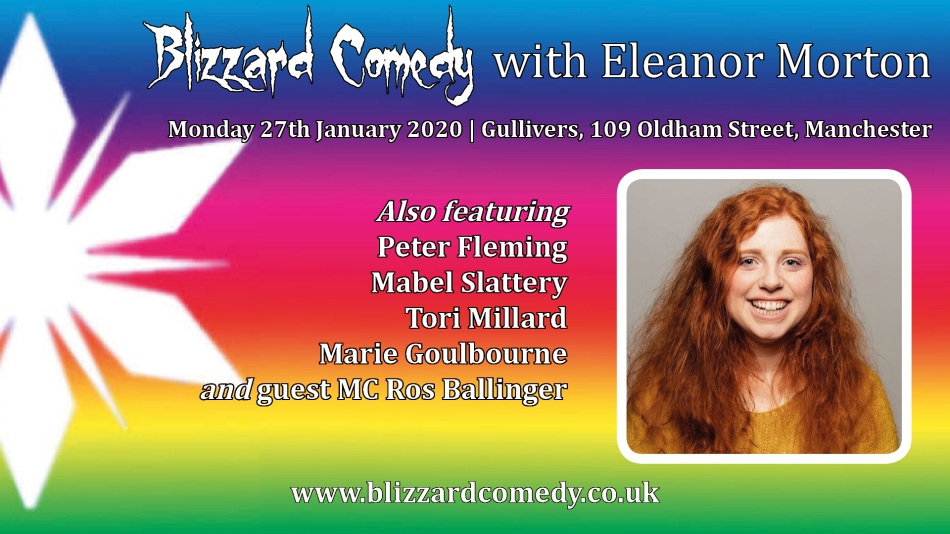 And we’re back! Kicking off the new year in style with the Blizzard Comedy shenanigans you all know and love!

Blizzard Comedy is a proud safe space with explicit content policies on Racism/sexism/homophobia/transphobia/ablism, and a general blanket ban on being a dick. We also make every effort to content warn any potentially difficult or triggering material ahead of time, and we keep audience participation to a minimal, and only with consent (signified by a sticker you can opt to wear if you are okay with being actively involved with the show).
On top of that we try to have a wide array of acts (subject to availability) So you can be confident you’re never going to end up watching straight white men in shirts for 2 hours, unlike some other comedy clubs which shall remain nameless. (Hint; it’s most of them)

Kicking off our first show of 2020 we have headliner ELEANOR MORTON:

Eleanor Morton is a Scottish stand-up, writer and actor who started performing stand-up when she was 18 years old. She is also a performer with the award-winning London comedy groups Weirdos and Comedian’s Cinema Club, and a board-member of alternative night ACMS.

Eleanor’s notable gigs in her early career include supporting Josie Long and Tony Law. Recently she supported Stewart Francis on his Pun Gent tour, and Frankie Boyle on his Hurt Like You’ve Never Been Loved tour. She appeared on BBC Comedy Presents at the Fringe in 2019.

Eleanor has written for The Newsquiz, The Now Show, Newsjack, The BBC Scotland programmes What’s Funny About The Referendum? and SKETCHLAND, and appeared on BBC Scotland’s ‘Scots Squad’ and the BBC’s online ‘Room To Write’.

Her most recent TV performance as a stand-up was BBC’s Scotland’s The Comedy Underground. She has also been a panellist and writer on Radio Scotland’s Breaking The News, and appeared on Radio 4 and Radio 4 Extra. She has performed six shows at The Edinburgh Fringe, all at The Stand Comedy Club. This includes her 2014 show Lollipop, (Nominated for a Scottish Comedy Award for Best Show), and Great Title, Glamorous Photo (2018), which can both be found on NextUp

Supporting Eleanor we have:
PETER FLEMING:

Retired children’s TV pioneer Peter Fleming needs your help. His legendary BBC programmes are lost from the archives, from Professor Zany’s Mad Laboratory (1962) to Mrs Peregrine’s Wingless Birds (1976). Join this nationwide search for them as Peter reflects on his career, shows off vintage memorabilia and reconstructs classic clips. Help him find all your childhood favourites, and his family if there’s time at the end.

As heard on BBC Radio Wales.

Hailing from a small village in Cornwall, Mabel Slattery is presumed to be the result of a clandestine Pagan ritual in which a hobbit, a kitten, a small whirlwind and a thesaurus were inexpertly combined.

Tori Millard, new to comedy for the 4th time in 5 years. Will this be her last? Tori has fell on hard times in recent years. Maybe she’d be a bit steadier on her feet if she ever put down the wine. But no matter how many times she falls.. she never spills a drop! Voted 2019s most likely to become patsy stone. She’s Loud, she’s Proud and she’s truly terrified of rejection, which as a amateur stand up comedian has a bliss, beautiful irony to it.

Marie Goulbourne is a comedian and actor. Marie enjoys trains, science fiction and talking about herself in the third person.

As always Blizzard Comedy is COMPLETELY FREE AT THE POINT OF ENTRY (As a certain other institution should remain). Book your free ticket here.

But if you would like to support us you can do that at:

Or by giving us cash on the night, or donating via PIN/Contactless on our shiny new PDQ machine!