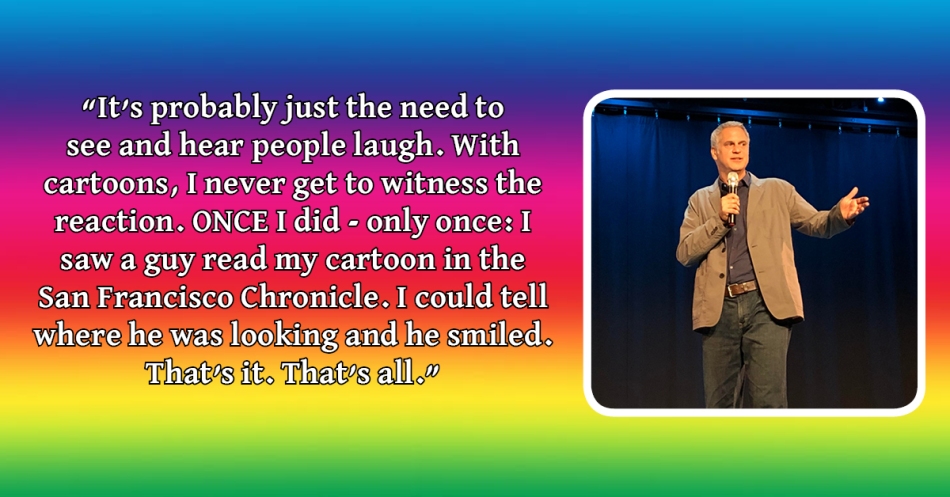 Tell us about your show, Kugleroni.

I’m an Italian-American Jew. I needed a cool name for an hour of stand up.

Lots of pastas have the suffix ONI at the end – and everyone’s heard of Kugel. I put them together and baked it for 45 minutes at 350 degrees for 20 minutes.

Between your cartoons and your comedy, you’re known for your sharp commentary. How much of this sort of thing can audience expect in this show?

I’m known for talking too fast. I’m sure that someone used the term ‘sharp commentary’ to sell tickets. I try to do smart stuff. I think that I learned some good habits from two decades in San Francisco. The crowds are educated, forward thinking and progressive. You can assume some competency there. Most people had a library card and possibly a passport.

I’m not a political comic exactly, but I did a political tour in 2004 with some pals. I do have some material about Trump and racism, but it’s merely in the set. It’s not the whole set.

How do your cartoons feature in your show?

When I think of a premise, I see it visually and decide if it’s best brought to life as a cartoon or a bit onstage. Once in a while, I can take a bit from the stage and adapt it for a strip or a single panel cartoon. The show is mostly stand up, but I close with a brief slideshow. Some it is interactive with input from the crowd. It’s really fun to do. Some of it is constructed where the slide itself is the punchline to a bit.

What made you want to mix your cartoons with your stand up?

It’s probably just the need to see and hear people laugh. I draw them at home or in a coffee shop and then submit them to magazines or post them.  I never get to witness the reaction.

ONCE I did – only once: I saw a guy read my cartoon that ran weekly in the San Francisco Chronicle. I could tell where he was looking and he smiled. That’s it. That’s all.

What made you want to bring this show to the UK Jewish Comedy Festival?

I’ve done a bunch of Jewish festival gigs in the states, where I’m from. So, I have material that pertains to our culture, traditions and holidays.

It’s too niche and specific to do in a club gig.

How differently do audiences respond at festivals like this compared to typical comedy club crowds?

At a Jewish festival or at a synagogue the audience are there FOR this material as opposed to a comedy club crowd.

Similarly, I have an entire show all about superheroes and sci-fi, Evil Cyborg Sea Monsters. I LOVE doing this show at comic cons or theatres because again it’s a smart crowd – but mostly they WANT to hear about werewolves, Batman, time-travel and Yoda. If I indulgently did a whole 20 min set at a comedy club JUST about Star Trek, the people who are not Star Trek fans would lose interest. Give the people what they want. I’m old school that way.

I never think about that. I’m there to entertain.

Find out more about the UK Jewish Comedy Festival here.