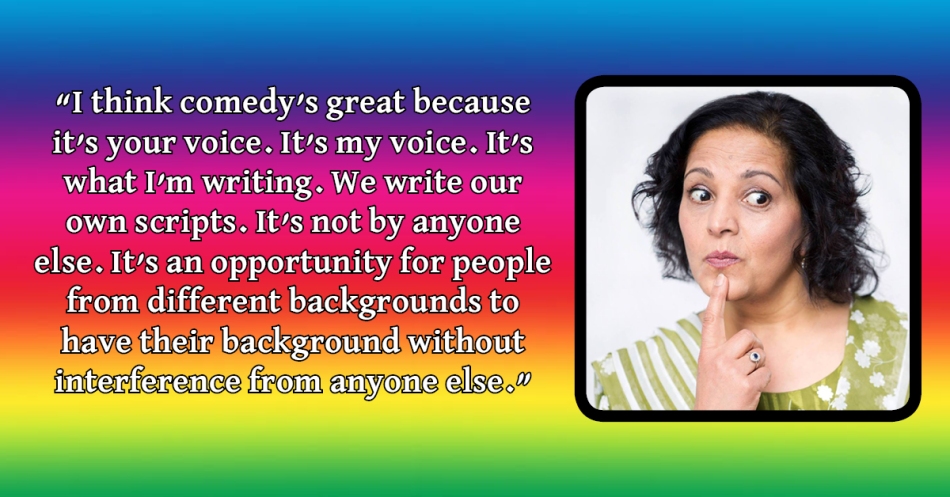 Tell us about your show, Where Are You Really From?

It’s a question I get asked all the time. It’s really good to try to get people to spark some thought in their mind like, oh god she’s been asked that question so many times, I had better not ask her again.

What inspired you to write a show exploring identity?

I am by birth Pakistani, but I grew up in Scotland for about 90% of my life, apart from the four years I lived in Wales while I did my PhD. I think that if I, as a Scottish Pakistani person, can help reduce some of the barriers to integration and show both sides of the cultural divide that we have more in common that we do differences, it might make it easier for people to integrate. And vice versa. Because British people have taken on board our food, our dress sense, even some of our music, but it’s not as reciprocal as it could be.

This is quite a personal topic to write a show about. Was it ever daunting discussing it on stage?

No. I’m not saying that I’m scared of or not proud of. There are biographical instances. A lot of what I say is true stories about my family and things that have happened to me.

But I wanted to make sure I didn’t offend anybody. I don’t mention any names. Even when I talk about my auntie, I say it as quite a generic auntie.

You directly challenge people’s assumptions about cultural stereotypes in your show. What made you want to bring that so bluntly into your act?

I think because I’m always challenged when people say to me “Where are you from?”

Comedy is such a fantastic medium to be able to get a message across to people without it sounding preachy or ranting. It’s a good way to say to people, “Here, I think we should think about this because it really upsets me,” without actually saying it to them.

It’s not like I did an Afro-Caribbean accent or a Chinese accent. I only did a Pakistani accent. I don’t know if ‘racist’ was the right word, but that was how they described it. I think it made them feel uncomfortable so they didn’t want me to do it. But that’s how I knew that I was actually doing the right thing. If it’s not making me think I’ve made you uncomfortable, then what’s the point of doing comedy?

If you see clips of me on YouTube, you’ll see I used to have a character called Aunty Jee. I still have the accent, I still have the clothes but I’m now me on stage as I go into the different charcters.

How do you think addressing identity in comedy can influence society’s approach to it?

If somebody comes to my show and they think more carefully about how they approach things, then that’s a win. Because my parents are very middle class, but still people ask me things like “What does your dad do – does he drive a taxi? Does he run a corner shop?”

Don’t make assumptions about what’s going on. My father wasn’t any of those things. And I’m very proud of my family. And it’s really annoying to be lumped into a stereotype. And it’s stupid. How stupid are people that they think we’re all the same?

How do you think comedy as an industry can provide a platform for under-represented communities?

I think comedy’s great because it’s your voice. It’s my voice. It’s what I’m writing. We write our own scripts. It’s not by anyone else. It’s an opportunity for people from different backgrounds to have their voice heard without interference from anyone else.

I hope they take away that I was funny. I hope they laugh and that they enjoyed it. I hope they thought I was a warm, engaging person. And that they understand a bit more about what the challenges have been for people from a minority ethnic background and what it’s like.

I want people to take away the fact that my show, I suppose, is a story about families. A story about relationships. A story about the challenges that we face, that everybody faces. Not just a Pakistani family, but anyone who migrates to a different place. It could be a Scottish person going to Canada or a Chinese person going to Australia. We all have challenges. And it gives the audience a chance to step into my shoes and to see what it’s like to see things from my point of view.

And I’m not moaning, it’s not a rant. It’s a journey. There are highs and there are lows. And it’s really exciting, I’m really enjoying it.

What else are you’re looking forward to at the Nottingham Comedy Festival?

I live in Edinburgh, so I’m going down on the Saturday. I’m doing spots at a couple of shows and an improv show with Alex Leams at Rosie and Oscar’s. I’m really looking forward to that.

My show is on the Sunday night. So I’m excited about seeing what’s on Sunday during the day. I’ll have a look and see if there’s anyone I know on. Or anyone I don’t know, I like seeing new people.

And of course I’ll shop. I can’t come down to a different place and not shop, it’s against the rules. Charity shopping, of course.

Do you have any other projects coming up we should look out for?

I recently got contact by The Sun. I’m not right wing, but I was interested because they said I could talk about anything. First of all, it’s my voice. And I said I want to talk about what it’s like to be a Pakistani growing up in Scotland and being in the UK and how I’m challenging the stereotypes. And they said, “Yeah go for it.”

So I’m writing about eight or nine stories of varying length. They’ve said, “It’s your voice, say whatever you want.” Obviously it’ll have to go through legal so I’m not slandering anybody. But I’ve picked a few that I’m telling in my voice and I’m really impressed.

I think that, being in a right wing paper, it will give me an opportunity to break down some of the barriers and some of the misconceptions that people have about Pakistani people. I’m Pakistani, I’m female, I’m a comedian, I’m an actress, I’m older, so I’m quite unusual for them. But I’m taking it as a great opportunity to help with the integration process. It just seems to be the right time.

I’m a bit apprehensive that people might give me some criticism for it, ask why I’m doing it, but actually it’s going to help other people, for them to see that I’m just like them. I have brown skin, but apart from that I have the same opinions and feelings. I’m really excited about it.

When they called me, I honestly thought it was a wind up! But it’s not!

Make sure you’re clear about the reasons why you want to do comedy. Make sure you’ve got a thick skin. Be realistic about your expectations. Somebody once said to me that it take five years to find your voice. At the time I was only two and a half years into it and I thought, “What does she mean?” And now I’m five years into it, I know what she meant.

There will be the odd person who is just a natural superstar from day one. But the rest of us have to just plug away. It’s like doing an apprenticeship. You can’t just become an electrician in one day. You have to go to college and learn the ropes. I think it’s about being patient and being realistic. But most of all enjoying it.

If you’re not onstage and not enjoying it, you shouldn’t be doing it. I love being on stage. I love performing.

And you need to like people. People will pick up on it if they think you don’t like them. Audiences are much cleverer than you give them credit for.

Lubna is performing Where Are You Really From on 3rd November.

Find out more about the Nottingham Comedy Festival here.

Pre-pandemic, @markg1996 was an award-winning performer (Great Yorkshire Fringe New Comedian of The Year Winner 2018)
It is the two year anniversary of our first ever show TODAY.
Multi award winning comedian Laura Monmonth is bringing her sharp eye and quick wit to @thatthombee's team for our next show.
If you were thinking about getting one of our @NMITBank #fanfiction zines, now is absolutely the time to do it!