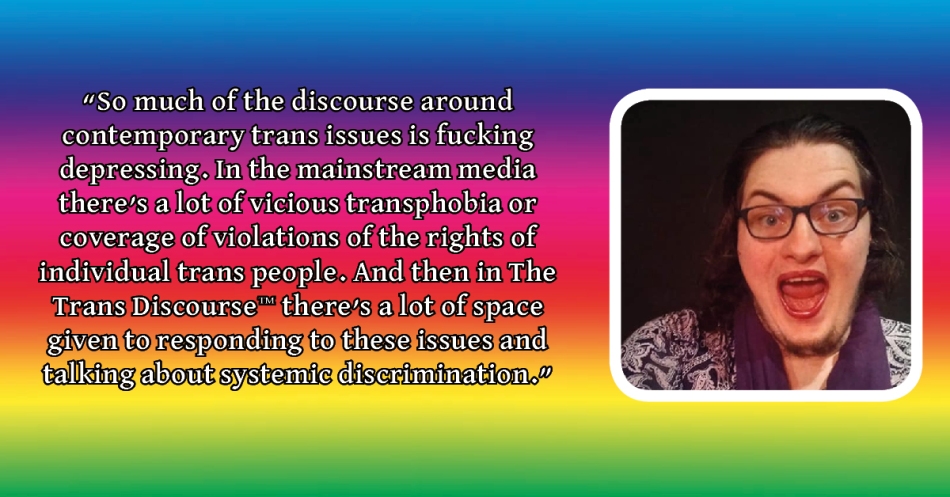 Tell us about your trans joy project.

It’s a writing project I started up focussed on the positive side of trans experiences. Each week I, or a contributor, writes a short piece about a specific thing which brings them joy related to trans identity. It’s aimed at shifting the focus from gender dysphoria to gender euphoria.

What inspired you to create a project centred on positive trans stories?

I wanted to feel good about myself as a trans person. I didn’t feel like there’s enough content about finding joy in being trans (and just generally finding joy) and I thought that other people might feel the same way. So every week I sit down and put together this week’s post about trans joy, and it’s honestly helped me so much.

What made you want to put together a zine as part of it?

I mean partly money! It’s an unfunded project and selling zines puts me in a position to pay contributors for their time, and generally puts it in a more sustainable position.

I think there’s also something nice about having a physical object you can keep at home and flip through when you feel the need for something positive. And of course not everyone is actively engaged in reading blogs so the zine gives the opportunity for the project to reach a different audience.

How do you think the current discourse around trans issues can be improved?

So much of the discourse around contemporary trans issues is fucking depressing. In the mainstream media there’s a lot of vicious transphobia or coverage of violations of the rights of individual trans people. And then in The Trans Discourse™ there’s a lot of space given to responding to these issues and talking about systemic discrimination.

Don’t get me wrong, it’s important we make space to talk about this stuff as well, but being trans is about more than just trauma.

How do you hope your project can influence this?

What kind of work are you including in the zine?

It’s pulled together from the posts already published on the blog, they’re written by me and a few other contributors and cover topics ranging from queer history to language. From the start I’ve wanted this to include a range of different perspectives and ideas. There’s no topic too big or too small, as long as it links back to the theme I want to include it.

Do you have any advice for people looking to embark on similar creative projects?

Find where you can add value to the world. What do you wish existed which doesn’t? And make sure it’s a project you love for its own sake because it’s a fuck of a lot of work if you’re not passionate about the idea!

If you’re trans and have something you want to contribute (and want to make £10), check out Quenby’s submission guide here.

You can buy physical copies of Trans Joy online here or in good queer bookshops including Portal in York.