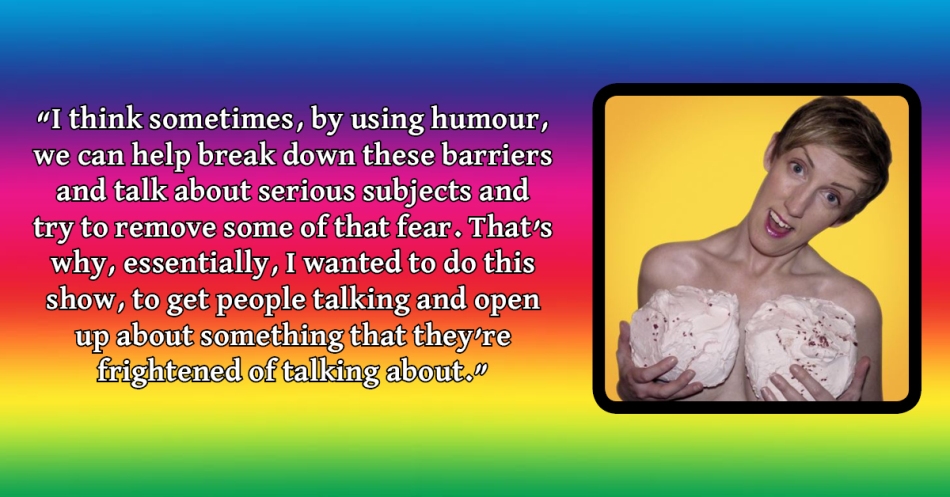 Tell us about the show you’re bringing to the Vault Festival, Twin Peaks.

Twin Peaks is essentially a glimpse into my life just as I am about to turn thirty and discover I have breast cancer. It’s no secret that I’m an idiot, but when faced with my own mortality, how does an idiot cope? You’ll have to come see the show to find out, but I can tell you it does involve marigolds and a mannequin’s head called Celine.

What made you want to write a show about breast cancer?

I think it was just my experience. Being a young woman with cancer, I was quite surprised at how people react. I always describe it as a bit like Voldemort, cancer, the sheer mention of its name can send people running in the opposite direction.

So I started thinking, well what makes people do that? It’s fear. I think sometimes, by using humour, we can help break down these barriers and talk about serious subjects and try to remove some of that fear. That’s why, essentially, I wanted to do this show, to get people talking and open up about something that they’re frightened of talking about.

This is obviously a very serious and personal topic. Was it ever difficult making it funny?

If I’m honest, I’m quite an upbeat person. Like I said, I’m an idiot. Things tend to go wrong around me without trying. So there’s a lot of funny things that happened to me during my experience, so I drew on those. Humour helped me get through it. That’s where the idea for the show started.

When I fell into comedy, nobody knew I had cancer. To celebrate being five years clear I decided to get up on stage and do a set about some of my experiences. Not only did people laugh about it, but I did get some really good reactions from it.

Somebody approached me after the show to say that they’d had a lump that they were ignoring because she was young, she was a quite a similar age to me. After hearing what I’d said, it provoked her to go get it checked out. She’s fine, but it got me thinking, if there’s something positive that could come out of this experience, if I could help others and maybe prevent them going through a similar experience then that’s got to be a good thing.

What do you think it is about humour that helps people to cope with difficult experiences?

I think it depends on the person, it’s different for everybody. I can only speak personally from my experience. Laughing is like a medicine. It releases endorphins and serotonin and all sorts. It just makes you feel better. There’s nothing as good as having a good laugh at something. I think that’s the best way I can explain that.

What inspired you to include burlesque and music in this show?

I started off in stand up and then I moved into sketch comedy and formed a sketch comedy group with a friend of mine, which evolved into us becoming burlesque producers and hosts. So I’ve spent a lot of time in the cabaret world, which has influenced me. A lot of my comedic influences are people like Morcambe and Wise and Victoria Wood, who have that ability to be able to go from doing stand up to character comedy to good old fashioned songs. I suppose I’ve taken that and put it into the show in the hope that it will appeal to everyone. So there’s something there for everyone.

By using comedy and burlesque, I hope that it will provoke somebody to think “Hey, I’m going to start checking my breasts.” I hope it raises awareness, I hope it opens the lines of communication about talking about something that maybe people are frightened of talking about. I know that previous audience members have said that to me.

And just that it’s okay to talk to somebody who has got cancer. You might now know the right thing to say, you might say the wrong thing, but say something. It’s still the same person underneath.

What would your advice be to someone trying to talk to a person in that situation?

Just be yourself. It’s the same person. I remember it’s so isolating. It really is. You’re caught up in your tests and appointments and treatments, so just hearing about somebody’s day and what they’ve been up to is such a good thing. Just be yourself.

Just be brave and give it a go. Get out there and try things and don’t be disheartened if those things don’t work. Just keep trying.

The main thing is, only do it if you’re enjoying it. If you’re not enjoying it, stop or try something different.