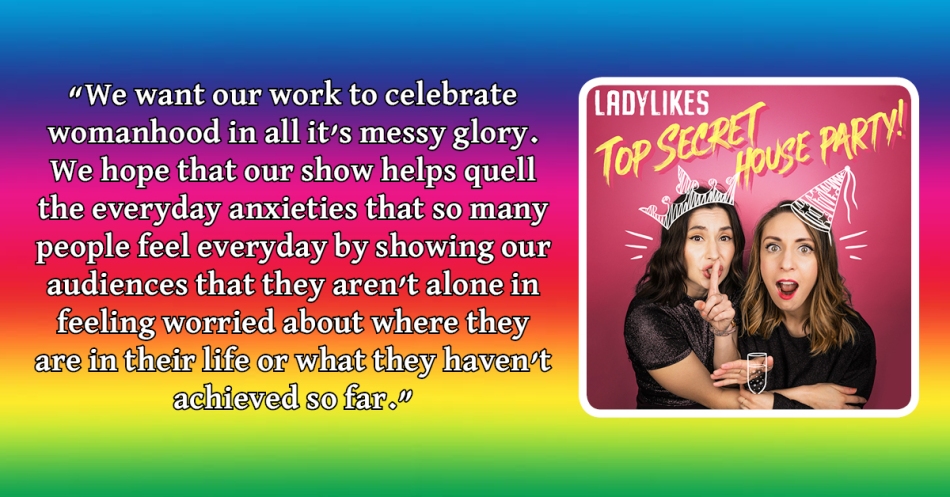 Tell us about the show you’re bringing to the Vault Festival.

We are bringing our debut sketch show, Top Secret House Party! to the Studio theatre at VAULT Festival 2020. It’s a hilarious (and sometimes terrifying) look at modern-day party culture. Over the course of one hour, we take our audience on a journey through a plethora of party situations, from Hen Do horrors to school disco dramas. It’s an exploration of the terror, chaos and joy that comes with feeling a bit lost in your twenties.

Your show explores the diversity of modern life. How did you decide which aspects of life to tackle?

I think it was a pretty easy decision as we based it around conversations we found ourselves having naturally. Millennials seem to be enjoying (or stuck) in an ever extending adolescence, and so we found ourselves at an age where 10-20 years ago we might have been settling down, buying homes, etc., at this age.

However, with a changing economic and social landscape we have the freedom to choose a plethora of different paths, and much less money in the bank compared to our parents.

Plus, with the age of social media, the pressure to achieve and live your best life can be quite overwhelming; it can be easy to find yourself assessing your achievements to date. Social media is a real culprit for allowing you to doubt yourself and in a society that’s obsessed with milestones you can often feel left behind if you see that picture of the wedding of a girl you went to school with, or extravagant 30th birthday party of your cousin.

Finally, we wanted to address topics that still continue to scare us as young women, such as, if we live in the age of equality, why is it still so dangerous for a woman to walk home at night?

What is your trick to bringing your own unique flavour to universally relatable situations like office parties and night buses?

The key to making something universal, ironically, is being super specific. Phoebe wrote a song in our show about the terrors of getting home after a night out out of frustration of ‘#notallmen’ understanding why sometimes women feel threatened walking home alone late at night. We’ve had a lot of female audience members cry at that song and a lot of men thank us for including it in the show because they had it spelt out to them the shit reality it can sometimes be.

But in the broader sense, we like to write from our own experience and perspective as we never want to speak for other people, be it our gender, age group or sex. We hope that our material is relatable and either makes people laugh because they agree or because they never thought about it that way before.

Your show uses comedy to address serious topics like climate change and politics, but stays light-hearted and high energy. Is it difficult to strike this balance?

Absolutely. As we know, when trying to address a serious topic you want to make sure you’re not ramming it down someone’s throat, but equally comedy is often the best way to make people sit up and listen. We aren’t afraid of making people squirm a tad when we hit a hard topic, but we aren’t going to linger on the matter. It’s more like, ‘here’s our thoughts on this, you got that? Ok let’s move on’.

What inspired you to give your show a party theme?

Parties can be a petri dish for anxiety – who might you bump into that you need to impress, what do I wear, how do I get home, will I get that perfect Insta shot to prove I’m having the TIME OF MY LIFE! – and we thought these settings would be a great way to look at modern anxieties of feeling like you’re not where you want to be. There’s so many relatable aspects of parties, but we also wanted to look at the fact that parties should fun and we need to take the pressure out of them!

How did you get into sketch comedy?

We actually met performing in NewsRevue in 2017, which is the longest running live comedy show in the world (oo-er) which was the introduction for both of us into sketch comedy as we immediately caught the bug. Our director said that because of our comic chemistry we should really look at creating our own work, and the rest is history!

That they haven’t wasted a tenner! Ultimately, we use comedy as a platform to entertain, and we hope empower our audiences. Though it’s changing, comedy can still feel like such a male dominated industry, and we want our work to celebrate womanhood in all it’s messy glory. We hope that our show helps quell the everyday anxieties that so many people feel everyday by showing our audiences that they aren’t alone in feeling worried about where they are in their life or what they haven’t achieved so far.

The VAULT Festival just gets more and more exciting each year and 2020 is going to be fantastic. There are so many female led projects that are going to be incredible, like On Arriving, which is a one woman drama exploring a young refugee’s fight for survival as well as loads of brilliant work-in-progress shows that will be cutting their teeth at VAULT before going on to win a million awards. Jenny Kassner, Olga Koch, Britney and Egg will all be brilliant we have no doubt.

It can seem like a very daunting world, and if you’re female identifying, but we would say, take the plunge and give it a try. Also accept that you’re not going to be a pro immediately. As perfectionists, we found we beat up on ourselves for not making the award winning, sell out phenomenon from our first sketch, but of course you’re not!

Keep writing and honing and practicing, and keep the faith that someone will appreciate and get the work you’re putting out there. There are so many courses and classes out there to get involved with such as The Soho Theatre Labs and The Free Association Improv school. A lot are offering bursaries and scholarships now especially to performers from diverse backgrounds.

But write, write everyday even if it’s for just 10 minutes!