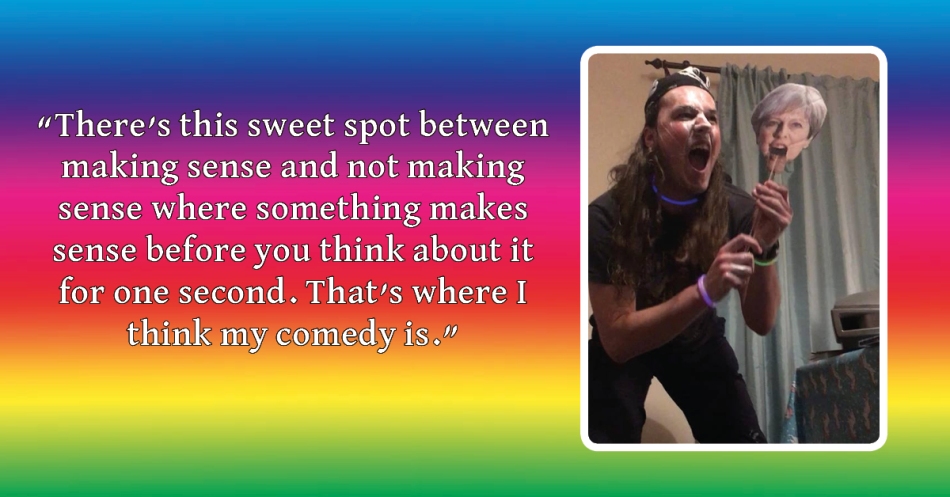 Tell us about you/your act.

Hello. My name is Edward and I am a high school science teacher. I spew gibberish while making a mess on stage and have the audacity to call this a creative outlet. As I’m pretty new to teaching I don’t get much time to do comedy these days. Blizzard is my comeback gig. I’m filming it for a DVD and, to show I’m serious, it will be out on Bluray.

How did you get into comedy?

I just decided to try it this one time and it went really well. If it had been a different audience I’d have died and never done it again. But people seem to like it.

What’s the best gig you’ve ever had?

There was this one gig where I bought 15 punnets of cress beforehand and ate them for ten minutes for the start of my act. People hated it. It was great.

What’s your favourite thing about working in comedy?

Being the centre of attention. The whole room is looking at me wishing they were somewhere else. It’s the dream.

Who is your favourite comedian we’ve never heard of?

George Cottier. One of his videos ended up in a Greek art gallery. He’s amazing.

You’re known for your surreal comic style. What inspired this approach to comedy?

Firstly, “known for” is a really strong word.

Given I’m super political, I always assumed if I did comedy it’d be some form of satire. But it turns out I can be quite funny if I just talk nonsense and bamboozle with props. I think there’s this sweet spot between making sense and not making sense where something makes sense before you think about it for one second. That’s where I think my comedy is.

It all seems to coalesce from conversations with friends, the surreal comedians ploughing the circuit, and growing up with Monty Python. I think there’s a bit of Tim Vine in there as well.

What motivated you to use props in your act?

It just happened really, I never thought, I think I’ll be a prop-based comedian. I just kept coming up with stuff that relied on props, and now my sets are really expensive.

It started when, in real life, a load of sugar spilled in my bag, and so I had a bag full of sugar for a while. I was trying to think of ridiculous things to do with it, like trying to pay for club entry using sugar, but it ended up being one of my jokes. It still goes down really well. I won’t use it at Blizzard.

What do you hope people take away from your comedy?

I hope they’ll be too confused to take anything away.

What challenges have you faced working in comedy?

It’s just a hobby, so doing nights when I can has no huge obstacles. It’s not like I’m trying to scrape a living on it.

How do you think that comedy as an industry can better address these issues?

Not addressing any of the issues that I didn’t raise above, but I despise the idea of gong shows. Whatever happened to seeing comedy for the love of comedy, rather than to see people being humiliated?

What appealed to you about being part of a show like Blizzard?

It’s a much needed response to the whole “freeze peach” thing. And a nice way to address diversity in comedy. You go to so many open mics and it is very much twenty white men making edgy jokes (and I fully appreciate the irony of me saying this). This kind of gig, making sure to put minority groups front and centre, is just the kind of thing comedy as an industry can do to address this.

What have you got coming up that we should look out for?

As of now, nothing. One day I want to do a show called “Edward Roworth takes down a tent”, but that’s all pie-in-the-sky dreaming. So, if you ever see a show with that title, come and see it.

Do you have any advice for other people looking to get into comedy?

Give it a go! Leap out of your comfort zone onto an open mic night (my first was Comedy Balloon at the Ape and Apple, which was really good for a first gig), and just try it out. Some stuff will work, loads won’t, but just keep trying and eventually you’ll find what style and jokes work for you.

Edward, we want to coronate you as king of all I see.

That’s a bit much.

We didn’t write that last one, but we left it in anyway because we respect the guts there.

Edward is performing at Blizzard on Thursday 19th December.