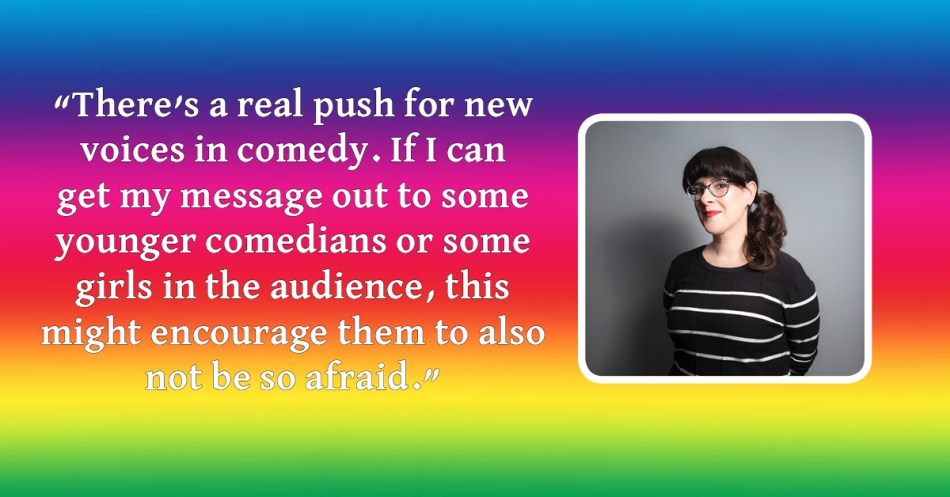 Tell us about your show, The Self Confidence Trick.

I delve into why I think I’ve struggled. Obviously as a child I was picked on so we chat about that. I love being able to talk to the audience about whether anyone has ever been bullied because there’s not a person out there who hasn’t… and if someone doesn’t raise their hand, well, we’ve found the bully!

So yeah it’s touching base with that.

What made you want to make a show about self confidence?

I think being a stand up, I never really thought about it until much later into my career.

As a child I was always insecure and picked on. Once I found theatre and drama, I really started to figure out who I was and what I was about. Stand up, I think, was the final step in making me realise that this was my subconscious getting me to do something to do something that requires a lot of confidence. I think that’s why I want to do a show about it.

To be very honest, I’ve been doing stand up for twenty years, but I was a little nervous about making a one woman show particularly, a solo show to take to Edinburgh. I don’t know, it’s a scary place to be, when you put yourself out there in front of audiences and reviewers and people that are critiquing and looking at things with a fine-toothed comb. That’s really scary.

In a way I’m challenging myself to do this, to push past that fear and to have the confidence to do it no matter what the outcome or what other people’s opinions of me might be.

What do you say to people who would think you need a lot of self confidence to do comedy in the first place?

I would say yeah I guess you do. But standing up and chatting in front of an audience is always something I’ve loved to be good at. And I think it’s because it’s me standing in front of a mass of people, performing at people.

It sounds silly but for me I think this will be a bigger step towards opening up about some of those vulnerabilities I have.

You are a self-confessed over-sharer. How personal can we expect this show to get?

This show has given me a chance to share experiences that maybe late night club audiences wouldn’t want to explore.

This is me, this is my show, this is what I want to do, as opposed to performing in clubs, which is what I do almost all the time. In those shows of course I’m myself and I’m sharing my own stories, but this is a bit more personal and more the way I want to do it. I have the final say in what is going to be said on stage, instead of trying to navigate my way through a group of drunk adults.

Has writing this show taught you any secrets about self confidence you’re willing to share with us?

Well it’s early days, so let’s say that I think the more you try every day to be confident and to be genuine, to not be afraid of what others might think, it does get a bit easier. Am I there? Absolutely not. Will I be by the end of the show? Probably not.

But I can definitely say that it’s getting a lot easier to even answer the question ‘What is this show about?’

What made you want to perform the show at the Women in Comedy Festival?

The Women in Comedy Festival, I think, is such an amazing thing and I’ve been a part of it since it began, when Hazel started it.

I just thought this is a great venue and a great time, because there’s a real push for new voices in comedy and in the stand up community. I think if I can get my message out to maybe some younger comedians or some girls in the audience, this might encourage them to also not be so afraid and to pursue what it is that they want to do, whether that be comedy or other things.

I thought the Women in Comedy Festival will be great for me because I really want to share this message with women right now. I mean, also everyone, and audiences are a mix. But it focuses on women in this industry and I think that is really important.

How do you think comedy as an industry could improve to be more supportive of women?

From my perspective – and again I am just one human being, but I am a female stand up and I have been for twenty years now. I was in Canada, I started my career there, and then I came to the UK. I have to say, in my twenty years of comedy, I feel like there have been massive changes in the last couple of years. I feel like the world of comedy is actually trying to make it more supportive and inclusive for women and for other diverse voices.

I feel like it’s already getting miles better than it was even a few years ago. I really believe that. I can feel it in even audiences.

I feel like we always started in the negative no matter what. We were prejudged. I feel like now I step on stage and I can feel audiences being like “yes! It’s a woman on stage!” which is something that was a rarity for all of my comedy career so far.

So this is a really big time in the comedy world, I think.

Are there any other shows at the Festival that you recommend people catch?

There are loads of shows that I know people have heard of that those shows will sell out, so I’m trying to think of some acts that I really want to recommend. Rachel Fairburn, who is fantastic. Kiri Pritchard-McLean and Desiree Burch will be around. There are some really heavy hitters.

I would say to people, just take a read. Take a chance on some shows, on someone that you haven’t heard of. Maybe look for some content that you want to hear about because that’s the beauty of this festival. It’s a bunch of people being able to do stand up but also tell their stories, which sometimes we don’t always get a chance to do completely.

So I’d say go and read about the shows and take a chance on something you think might appeal to you.

Do you have any advice for other women looking to break into comedy?

Yeah. Don’t be afraid. Just do it. Don’t spend too much time worrying or planning. If you want to try it, just find an open mic somewhere and try it. Your first time is your first time, it doesn’t count, it’s the moment where you know, do I want it or do I not?

I cannot encourage women enough to stop procrastinating and give it a go. You’ve got nothing to lose. And like I said I feel like this is the most supportive time ever.

Allyson is performing The Self Confidence Trick on October 11th as part of the Women in Comedy Festival.

Find out more about the Women in Comedy Festival here.