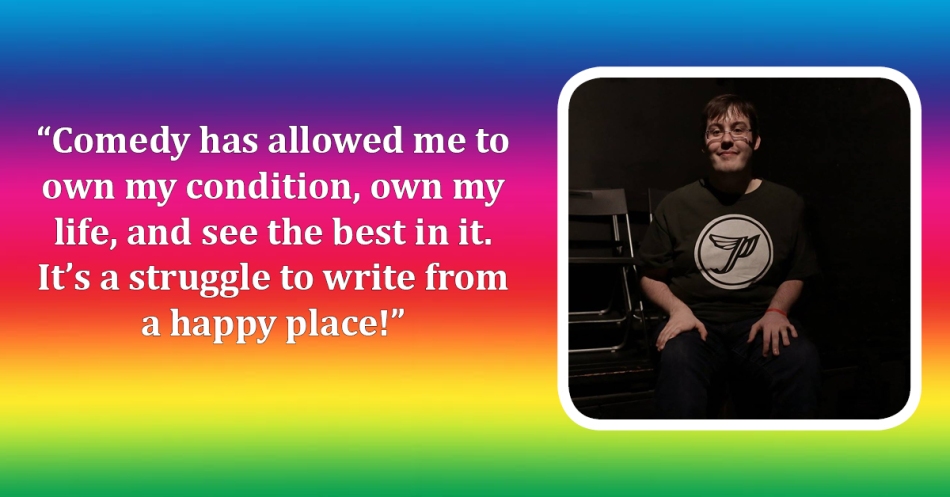 Tell us about you/your act.

So I’m John Porter, I’m 29, I have cerebral palsy and I live in Manchester (alone, don’t tell ATOS). My act is mostly me talking about things that are going on in my life and inside my head – very anecdotal! It gets dark in places but that’s largely because I pretty much use the microphone as though it’s my diary.

How did you get into comedy?

I was 22 and a directionless, jobless, graduate. I’d spent my entire life not shooting for things I really wanted out of fear and the misguided idea that my disability would/could ‘hold me back’ – I’d decided I’d had enough of that. Then, for whatever reason – largely boredom – I started writing, as I had before, things I found funny – and decided I wanted to give stand-up a go. Then I found the Frog and Bucket in Preston, signed up for Beat The Frog, and never looked back.

What’s the best gig you’ve ever had?

1 – You’ve Been Nabbed 25 for Rick Hulse, where I got a standing ovation from 2000 people (I look at the picture on particularly bad days).

2 – My solo show in 2018, oddly enough at Gullivers Manchester, where I felt the love of some wonderful people in my life that I still love to this day.

Or 3 – The solo show just gone (July 20th) at Anthony Burgess, which was very similar to 2.

What’s your favourite thing about working in comedy?

Performing it, and feeling the love throughout the room when I do.

Who is your favourite comedian we’ve never heard of?

Neil Elston. Quite possibly the best MC I know and one of the nicest people too. If he gave it everything, he could be a superstar, and no comedian would deserve it more.

Your comedy has been described as “sweetly menacing”. How did you get that reputation?

God only knows! It’s one of my favourite quotes about me though, I love Bryan.  If I was trying to figure out where it came from, I think it’s that ‘using performance as a diary’ thing that makes it ‘menacing’ or ‘dark’ but (I like to think) that my real personality shines through on stage, and as such, it’s delivered with a gentle likability that makes it ‘sweet’.

How do you feel about being described that way?

Pretty good! It’s a quote I’ve used on purpose for a reason, I guess. I think it means a lot to me that I can say some things that might seem off or strange or dark, but that people still see the ‘real’ me underneath it – and that people find it funny too!

Do you think there’s anything particular about the age we live in that is contributing to the popularity of gallows humour?

Sort of. I think gallows humour is quite British anyway, but we’ve always been strongest in the worst times because that’s what we do as a nation. We have a lot to be anxious and unhappy about right now – but I think being able to laugh at it is important, it gets us through. And I think laughing together with a comedian about that for an audience has a strong collective feeling – and we could all use that right now.

Your comedy sometimes address quite personal things. How does it feel talking about personal matters in front of rooms full of strangers?

Funny you mention this – it came up in a conversation with someone I care deeply for recently. I had been struggling to write and thinking about giving up. Their response to that was to say ‘I feel like you used comedy to deal with the bad stuff in your life. Now there’s not so much of it; so you don’t know what to do next!’ So yeah, pretty good. I think it allowed me to own my condition, own my life, and see the best in it. And she was right – it’s a struggle to write from a happy place!

What challenges have you faced working in comedy?

Other comedians. Most have been pretty good to me but Facebook arguments, pileons and peacocking all kind of do my head in.

How do you think that comedy as an industry can better address these issues?

Step away from the social media. You don’t need to have the biggest appendage in the room. Let your work speak for itself.

What appealed to you about being part of a show like Blizzard?

I’ve heard great things about it, and it’s in a wonderful venue, run by wonderful people.

Aside from appearing at Blizzard, what have you got coming up that we should look out for?

I haven’t got tons of things coming up, but I have just put my show for 2019, ‘The Impossible Dream’ on Soundcloud: https://soundcloud.com/jp49er80/the-impossible-dream-full-show.

John is performing at Blizzard on Monday 26th August. Find out more about the show here.

If you like the look of anything in our swish new shop or would like to make a regular donation to the show to pay our acts, please consider supporting us on Patreon.
We have a Zoom full of guests and we will be live on YouTube in about 15 minutes to roast this short yet eternal month. See you there!
Our playlist this month is on the theme of anti-nationalism.
We have badges! We will have hoodies and zines! Oh my word we have SO MANY BADGES